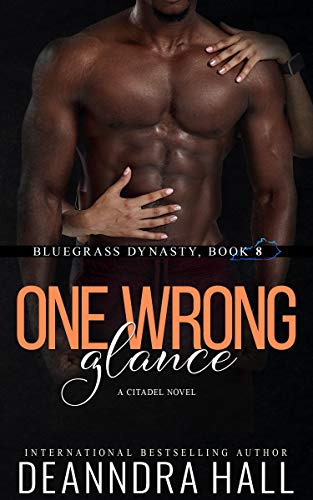 Parents are supposed to love their kids, not kill them. Right?

At least that’s what Malcolm Collins thought, but when a string of racially-motivated hate crimes bears his father’s signature quotes from over the years, what is he supposed to think? One clue after another pile up to threaten him and his Citadel bodyguard, Wendy Ryan, even as they struggle to forge a love relationship. Everything gets derailed over one crazy, kinky night, and they both think things couldn’t get worse. Unfortunately, that’s before one simple glance between them in the presence of his parents ignites a firestorm. It won’t be easy to snuff out, and it may even cost someone their life.

Join Wendy, Malcolm, and the entire group of Walters friends and family in a steamy, kinky end to the Citadel series. One Wrong Glance is a heartbreaking tale that shows you how powerful simple words can be–power that’s not always for the good.

Finish off Citadel and get ready for the Legacy series – grab this emotionally-charged read today!

Beep. Beep. Beep. Beep. As long as that machine kept beeping, Nikki knew things would be okay. If it stopped, so would her world as she knew it. Once was enough to go through that; a second time was completely unnecessary for her happiness.

“Waking up yet?” a voice asked from the doorway, and Nikki reached up to place her hand on Vic’s as it came to rest on her shoulder.

“Not yet. And I wish he would. Every minute that his eyes are closed is another minute that I’m afraid I’m going to lose him.”

“Nah. He’s strong.” Rounding the bed, Vic sat down in the other turquoise vinyl chair and leaned forward, elbows on knees. “He’ll come around in just a little bit.” A nurse hustled in and checked some of the machinery, then stepped back out. “You okay?”

Her golden curls bobbed as she shook her head. “No. I feel like I’m reliving one of the worst times of my life.”

“No. You’re not. He’s going to be fine.” Vic’s voice was forceful but sweet, and Nikki knew what he was thinking. He didn’t want her going down a memory lane that would send her into a tailspin. She had to stay focused and positive for Tony’s sake. The medical personnel didn’t have to tell her that helping him stay optimistic was important; he’d heal better if he wasn’t stressed, upset, or depressed. As far as she was concerned, she was now his gatekeeper and it was her job to make sure things that would take him down were laid to waste.

“He will be. I’ll see to it.” She could feel that resolve building down deep in her chest. Her sweet husband stayed right by her side when she was so sick and she’d be right there for him.

“I’m glad Clayton and John Henry decided to kind of put the Ashland expansion on hold for a few months so they’ll be available to help out if you need them. And you know if you need me, I’ll be right . . .” A groggy voice interrupted Vic and he and Nikki both focused their attention on the man in the bed.

“Nik?” Tony’s voice was little more than a drugged-up whisper.

“Baby, I’m right here. It’s okay. You’re in CCU.” Nikki leaned closer to the side of the bed, then stood and bent down over him, dropping a soft kiss on his forehead. “How do you feel?”

“You had a heart attack. At the farm. They brought you to the hospital in an ambulance and you talked to Vic and me before they took you in for the angioplasty. Do you remember any of that?”

“Yeah. I do now.” There was this weird look on his face, almost like he was contemplating global warming or poverty in inner city Detroit. Finally, he came out with, “Can I have something to drink?” Before she could answer, he snapped out, “And when can I sit up?”

Nikki almost laughed. She could tell right that minute – she’d have her hands full with him.